We are very happy to announce the release of a new version of Codoforum. 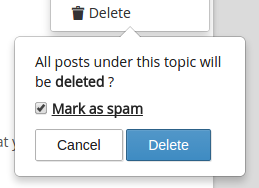 When deleting a topic, you will find a new option that allows you to mark the topic as spam. Whenever a topic is marked as spam, codoforum will scan the topic content and keep a count of the scanned words.
So, when a similar post is made in the future, it won't be publicly viewable, but will be sent for moderation.

We have also added the permission 'view category' in Codoforum V3.2 This new permission allows you to set which user groups/roles can view a particular category in the category list.

There have been many design changes with some improvements to the interface.

The hook system has been modified and has been made more extendable for use by plugins.